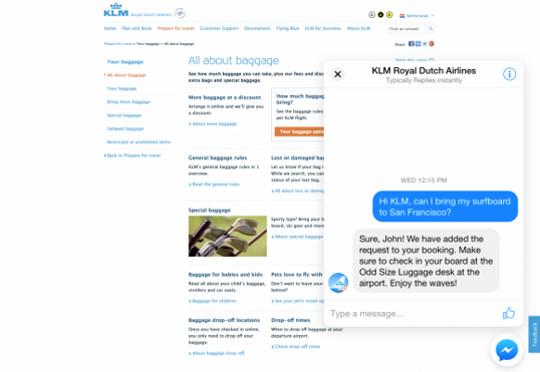 As of Wednesday November 8th, KLM Royal Dutch Airlines offers Facebook Messenger users in Japan, South Korea and South Africa the option of asking questions to service agents via Messenger customer chat on KLM.com.
This way customers are offered quick and personal service when booking tickets, changing bookings or in case they have baggage-related questions. KLM is one of the first airlines in the world and one of a select group of companies taking part in the pilot for this chat service in collaboration with Messenger.

This pilot with Messenger is a next step in KLM's social media strategy. KLM wants to be present on the social media platforms used by its customers. Customers frequently use Messenger to ask questions to KLM. The integration of Messenger customer chat into KLM.com makes it even easier to get a personal answer from KLM, which can be reread at any given time.

The small-scale pilot will be available in Japan, South Korea and South Africa, with agents communicating in Japanese, Korean and English. Customers can use Messenger customer chat via a chat now button that will appear on relevant KLM.com pages when a service agent is available. The pilot will serve to guide further roll-out of the service in the future.
In six Western European countries, KLM already has a direct chat service via KLM.com, available via the website itself. The new chat service via Messenger is a next step in KLM's social media integration.

Pieter Groeneveld, Senior Vice President Digital Air France - KLM: "'The introduction of Messenger customer chat on KLM.com is a new step in KLM's social media strategy. KLM wants to be where its customers are and make it convenient for them to ask questions throughout the entire customer journey. The integration of Messenger customer chat into KLM.com makes it even easier to have a personal conversation with KLM, which can be reread and continued at any given time or place.'"