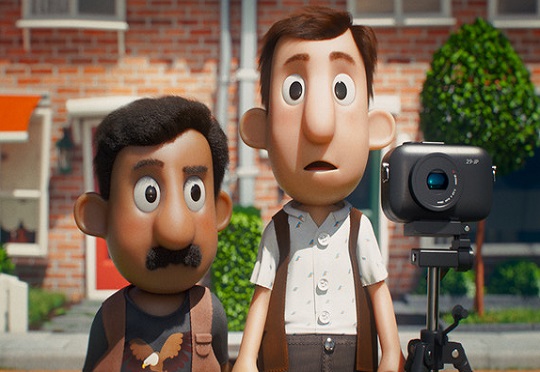 Nationale Postcode Loterij and Ambassadors have joined forces for the animated short film ‘Harry and Barry’. Ambassadors brings these two birdwatchers to life by creating a world through music and image.

The direct collaboration between the Nationale Postcode Loterij and Ambassadors ignited such a creative flow it extended the plans. “While working on this project the love for it grew within the minute. So we decided to create more than a short film about Harry and Barry. We felt like extending their world so everyone could enjoy the joy and fun of their street”, explains Vincent Lammers, Creative Director and Partner at Ambassadors.

“Next to the 3,5 minute film the Nationale Postcode Loterij is launching a website and social campaign, which is filled with lots of extra content about the lives of Harry & Barry.”

A prize can bring people closer and create a unity in the neighbourhood. Just look at the winners in a Dutch Frisian town who started a fund with their winning money for everyone who didn’t buy a ticket. These social aspects are the base of the Harry & Barry film.”

Harry and Barry are unique characters with mannerisms everyone can relate to. “We wanted to get every little detail just right” illustrates Nick Groeneveld, Associate Design & Animation Director at Ambassadors. “To really stand in a birdwatcher’s shoes we endlessly read all kinds of books on birds. We almost decided to go birdwatching ourselves! With the same level of devotion Harry and Barry have in making the perfect shot of the kingfisher, we started on these characters. That passion shimmers through in every detail of the film. Harry even has a kingfisher print on his shirt! I’m very glad that the joy we had in creating these characters definitely shines through in the humorous tone of the film.”

“The team was very excited to create this CG look with a whole world around it, like an animated feature film. All the characters have a very tangible feeling because of the subtle structures and shading of their skin, hair and clothing” explains Will Jeffers, Head of 3D at Ambassadors. “Don’t miss the little movement of the hair and clothing! For every environment, coffee pot, clock, curtain or little bird we kept the same level of precision in shading, which was definitely a challenge with 17 characters, 5 big environments and around 100 shots.”

This human touch is even more underlined in the grading, as Koert van der Ploeg, Colourist at Ambassadors explains. “The grading really tied the storyline all together, creating a cinematic and authentic feel. Together with Nick, we looked at adding more depth to the film and emphasising a personal touch. Making Barry’s environment a bit warmer and the hospital scene a bit colder, for example.”

The nuances of different scenes are even more highlighted through the music, while maintaining an overall joyous tone.

“When I wrote out the main theme on the piano, we looked at the musical translation of the unique personalities of Harry and Barry. Barry’s personality translated to a strong trombone sound, while Harry’s personality needed a lighter vibe like the clarinet” describes Joep Meijburg, Composer and Sound Designer at Ambassadors. “These instruments bring out their uniqueness and when combined become a very jazzy and uplifting composition. The story has its ups and downs, so the music guides the different emotions through the use of particular tones. For example, the scene where Harry climbs in the tree the tension increases, even going a little overboard. But being a tad dramatic plays out well with the animation.”