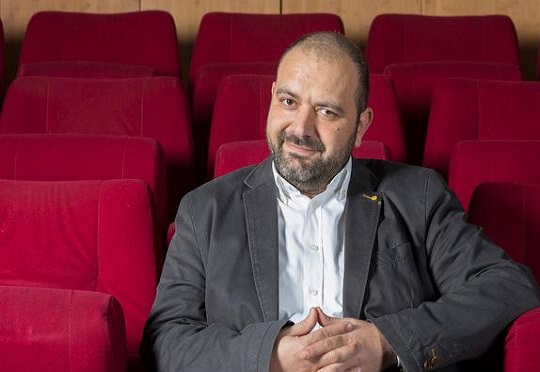 Orwa Nyrabia is the new artistic director of IDFA. Nyrabia, who was born in Syria, is well-known in the documentary world as a producer, festival director, curator and mentor.

Nyrabia started his career as an actor and journalist. In 2004, he started producing independent documentary films, including successful titles such as Return to Homs (which opened IDFA 2013 and was an award-winner at Sundance Film Festival) and Silvered Water, Syria Self-Portrait (Cannes 2014).

In 2008, Nyrabia and his partner Diana el-Jeiroudi set up the first documentary festival in Syria, DOX BOX, bringing renowned filmmakers such as D. A. Pennebaker and Chris Hegedus, Patricio Guzmán and Nicolas Philibert to Damascus.

To focus attention on the violation of human rights in his country, in March 2012 and 2013 he organised with his team a Global Day for Syria, with Syrian films being screened in cities around the world.

In 2012, Nyrabia was arrested in Damascus for his political activism. Prominent figures from the film world, including Jeremy Irons, Mike Leigh and Danny Boyle, protested against his arrest in a letter to the Syrian government. Following release he fled the country, going on to work as a producer in Egypt and Berlin.

Nyrabia is a member of the Academy for Motion Pictures Arts and Sciences, the Deutsche Filmakademie, the International Documentary Association and the European Documentary Network.

He has received several awards and distinctions during his career, including the George Polk Award for Documentary Film and a European Documentary Network Award.

Orwa Nyrabia has been involved with IDFA for some time now, in a variety of roles. He worked as a programmer on the theme programme Shifting Perspectives: The Arab World (2017), has sat on the festival jury and was active as a mentor and advisor for IDFAacademy and the IDFA Bertha Fund.

Orwa Nyrabia succeeds Ally Derks, the founder of IDFA who announced her departure from the festival in 2016 after 30 years at the helm. Barbara Visser was responsible for the festival programme in 2017 as interim artistic director.

“We are particularly pleased to welcome Orwa Nyrabia,” says chair of the IDFA Board, Derk Sauer. “With his knowledge of the documentary world, his international background and inspirational personality, he is exactly the right person to consolidate IDFA’s position as the most important documentary film festival in the world.”

“The appointment of a new artistic director is an extremely painstaking process, and we have spent a year on this”, says Festival Director Cees van ‘t Hullenaar.

“Together with the Board and festival staff, a clear profile for this position within the organisation was drawn up. I believe that these efforts have now produced the ideal candidate for us. Orwa is a powerful voice in the international documentary field, has a sharp cinematographic eye, a great knowledge of film history and is socially very committed.”