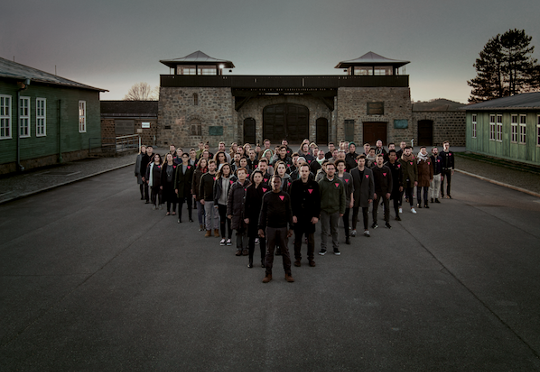 Eighty years since the construction of Mauthausen, one of the World War II Concentration Camps where homosexual men were imprisoned and forced to wear a Pink Triangle as a marker of their sexuality, Vangardist Magazine collaborate with Mauthausen Memorial to call for; an alliance against contemporary violations of LGBTQI+ rights all around the world; to reclaim the Pink Triangle as a symbol opposing homophobia; and a petition to implore António Guterres, UN Secretary-General to stand up to the United Nations for the abolishment of homophobic laws: The Petition appeals to UN SecretaryGeneral António Guterres to add the rights of LGBTQI+ persons to Article 2 of the United Nations “Universal Declaration of Human Rights”.

Mauthausen Concentration Camp was liberated by American troops on May 5, 1945, however a sad fact remains to be true: only a few people know about the torture of homosexuals in these National Socialist camps, and even less know about the current homophobic fuelled hate crimes around the world. That is why VANGARDIST Magazine, Mauthausen Memorial and Serviceplan Group have teamed up to create The Pink Triangle Issue, in an effort to start an online global petition aimed at making homophobia history once and for all, and to raise funds for the work of Rainbow Railroad.

On 7 April 2018, 80 people from 10 countries travelled great distances to Mauthausen Concentration Camp Memorial, and donated their time to take part in the creation of an artwork symbolizing ‘The Pink Triangle Issue’, a special Vangardist Magazine collaboration with Mauthausen. At the front of the Triangle stood the director of Mauthausen Memorial with the Vangardist Magazine Editor-in-Chief, and a member of the LGBTQI+ community who escaped torture in Jamaica with the help of the Rainbow Railroad. As a symbol of solidarity all participants wore a pink triangle on their clothes.

The photo shoot on 7 April was in tribute to the LGBQTI+ people who were persecuted and tortured at Mauthausen and other concentration camps during World War II, and those who are facing persecution in contemporary societies. It was captured in a series of poignant images by acclaimed Berlin-based photographer Olaf Blecker. Blecker’s photographs will form the visual aesthetic for The Pink Triangle Issue of Vangardist Magazine, which will be distributed at a press conference on 16th May. Vienna based photographer David Meran also supported the Issue with his behind-the-scenes photographs.

The film was directed by Christoph Kuschnik out of PPM Production company in Vienna. Kuschnig is an award-winning Director and Fulbright Scholar, whose short films have been screened at festivals around the world.

By registering with Facebook Connect, participants in The Pink Triangle Issue will have the opportunity to support the action and become part of the first global visual petition by having their photo included in the virtual Pink Triangle. They can also share and support the movement on their own Facebook page.